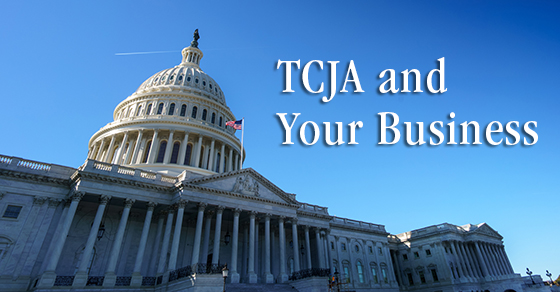 The recently passed tax reform bill, commonly referred to as the “Tax Cuts and Jobs Act” (TCJA), is the most expansive federal tax legislation since 1986. It includes a multitude of provisions that will have a major impact on businesses. Here’s a look at some of the most significant changes. They generally apply to tax years beginning after December 31, 2017, except where noted.

- Doubling of bonus depreciation to 100% and expansion of qualified assets to include used assets — effective for assets acquired and placed in service after September 27, 2017, and before January 1, 2023

- Doubling of the Section 179 expensing limit to $1 million and an increase of the expensing phaseout threshold to $2.5 million

- Other enhancements to depreciation-related deductions

- New limitations on deductions for employee fringe benefits, such as entertainment and, in certain circumstances, meals and transportation

Keep in mind that additional rules and limits apply to what we’ve covered here, and there are other TCJA provisions that may affect your business. Contact us for more details and to discuss what your business needs to do in light of these changes. © 2017